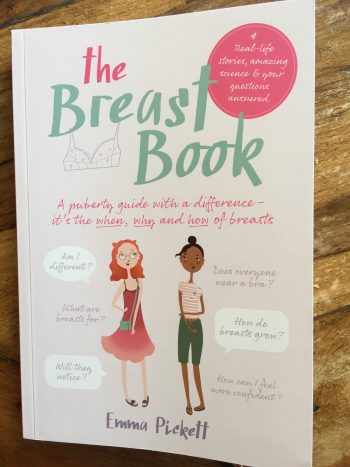 This commentary on The Breast Book is a guest post from Eufemia Torres. Eufemia is a qualified teacher from the UK and a mother of two breastfed children. She has a keen interest in the politics and social issues.

This article is not intended to be a book review. The commentary is centred on chapter four with some references to other information within other sections, and the wider social context in which this book resides.

The cover of Emma Pickett’s new book, The Breast Book, published by Pinter and Martin 2019 is subtitled “the puberty guide with a difference – it’s the when, why and how of breasts”.  Eagerly anticipated by a demographic that has sought out previous titles by Pinter and Martin, The Breast Book promised to be a counterpoint to the sexualisation and objectification of women’s bodies that girls may already be facing, even at the age of nine, the lower age of its own recommendation.

The publicity in the lead up to the book’s release heightened the excitement of women who were looking for – or didn’t know yet that they could be looking for  – evidence based information  about breasts and the normalisation of breastfeeding, in tween speak.  Aimed at girls aged 9 to 14, parents anticipated a book that could reinforce their own messages from a feminist perspective and a measured source.  The author’s previous and present CV highlights trustworthiness, and the independent publisher is noted for titles which centres women’s issues from perspectives which are underserved by larger publishers.

Chapter 4, titled ‘ Being A Grown Up’, is located squarely in the middle of the book. This chapter introduces queer theory and issues of gender identity which are reinforced by the personal story of ‘Jack’, an adult female who identifies as male and has undergone hormone therapy and surgical transition in adulthood. This section of the book is considerable in length, from pages 84 to 91 in a book of 171 pages.

While the location may be wholly incidental, it places breast removal and the transitioning of the feminine to the masculine at the heart of a book for girls about breasts.  Some women may interpret this material realisation as another example of how we hate women. Breasts are front and centre of a woman’s anatomy and a double mastectomy is placed at the geographical centre of the entire book. It is ironic that the core of the book is symbolically empty of breasts. The feminine breast themes are symbolically moved to both sides of a male chest narrative that centres masculinity at the expense of femininity and male attributes over female attributes. Placing this simplistic version of a complex narrative within a raging debate around self identification serves the needs of gender self identification advocates more than it does the needs of girls.

This symbolic placement can be interpreted in many ways. The publisher and author may provide pragmatic reasons for placing a trans narrative in a central location of the book. The meanings this location can create may be entirely unintentional on their behalf but it is an implication which the author and publisher cannot control. Michel Foucault writes on ‘intent vs impact’ that “People know what they do; they frequently know why they do what they do; but what they don’t know is what what they do does.” The meaning-making power of context cannot be ignored or dismissed once it is revealed.  As the publisher and the author are undoubtedly aware from their professional experiences, messaging is carried not only by words, but also by the modalities of placement, timing, tone, and the identity of the messenger as well as by what is ignored, diminished, or reinforced.  Chapter 6 addresses the theme of meaning making of images and language with reference to the power of social media in the lives of children. They are therefore well aware of the power of meaning making beyond the actual words.

Adults can only guess at the meaning-making that a child of 13 or under could construct in a mental framework removed from that of their trusted adults and with the knowledge gained not only from their peers, but also those knowledges mediated from social media and Youtubers (who have, for many replaced the personalities of Children’s BBC Television).  These knowledges are part of the construction where chapter 4 is framed.  To imagine that the information about gender identity and mastectomy in chapter 4 is neutral or unbiased is naive at best – this information exists in a framework where the trans narrative is neither neutral or is unbiased as recent news reports, digital media, academia, and medical opinion have been revealing.

The information on the form and function of the breasts are presented within the contexts of the historical, psycho-social, and biological realities which of course is the main aim of the book. It is extremely important to note that Jack’s story (which is supplemented by the story of Trevor MacDonald, another transgender adult who has undergone mastectomy), is told in an absence of evidence based information on mastectomy as a consequence of ill health, which is currently unexplained by the author and publisher. Although there is a passing mention on pg 61 – “my mum had breast cancer and a mastectomy [and operation to have breasts removed to take the cancer away]”  – Pickett has briefly explained on social media that the her intent is not to frighten impressionable young girls:

This selective storytelling and gatekeeping seems a little threadbare when gender reassignment surgeries could be quite disconcerting for young impressionable girls too and understandably so given the level of bio and sociological implications that lie within it. Many girls are currently dealing with aunts, mothers, grandmothers, and mums of friends who are undergoing or have undergone life saving therapies or indeed have lost their lives to breast cancer. These realities are marginalised without discussing breast cancer and mastectomy.

No matter – the ‘Message for parents/carers’ (p 11) states “In the 21st Century, it feels like we should be ready to hear his [Jack’s] story at this age.”  “It feels like we should” needs some attention.  Who is ‘we’?  – Is this the ‘we’ used by authority figures in hospitals and schools to children perhaps?   ‘Should’ is a verb of obligation, a sanctioned undertaking.  Does ‘we should’, create a veiled warning of consequence if we don’t?  The writer is activating her authority in the absence of a reason of why this is necessary, and basing it on her own subjective instincts. ‘It feels’, is a thin justification for to normalising messaging about gender identity and transitioning while failing to discuss the fact that 1., the overview of queer theory on page 84 is highly politicised and controversial and 2., the personal narrative taking up 6 pages is only one extended and heavily editorialised anecdote. Stories of women who have detransitioned or experienced regret after having their breasts removed are conveniently omitted.

Much abuse or neglect in the lives of women and girls is based on the feelings of authority figures. But the reader must take it upon the author’s authority that her feeling is justification enough for controlling the information on breast health that she makes available to girls. But limiting a discussion on mastectomy serves whose best interests? Currently, breast cancer affects 12.5% of women in the UK, many of whom will be recommended mastectomy as a potentially life saving treatment. The idea that girls should be protected from worries about cancer while privileging a transgender narrative on mastectomy creates its own messages.  The absence of discussion around cancer and mastectomy in age appropriate language, and the lack of perspective that the experience of having breasts removed might not just be ‘affirming’ but may well be confusing or sad, is not the honest and frank disclosure the book cover promises. And the question remains, in the greater context of the a book like this, why is a topic which will unavoidably impact a significant number of readers so neglected?