Breastfeeding is not a neutral act 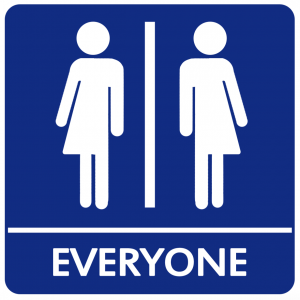 Language matters. The words we use have great power – power to communicate, power to mobilise, power to heal, power to harm.  Language can also disempower; structural and physical violence is easily perpetuated by a few carefully (or carelessly) applied words. What we name something or someone affects how they are treated, and thereby what they become.

And so I have become increasingly disturbed to watch the language of birth and breastfeeding support become a battleground in the name of inclusivity – specifically, the inclusion of individuals and families who identify as transgender or non-binary. More and more frequently, breastfeeding supporters and activists who use the term ‘mother’ are slapped on the wrist for doing so, on the basis that it is a gendered term which excludes those who do not identify as mothers. Similarly, ‘breastfeeding’ excludes people who don’t think of their milky bits as female or breasts. Instead, we should be using the ‘preferred terms’ of lactating parent. Human milk. Chestfeeding (or even just ‘feeding’).

As pronouns go, it’s apparently fine to use mother/breast/woman etc once an individual has consented for that kind of a label to be applied to them. But when speaking at population level, we are to assume that the invocation of terms perceived feminine make breastfeeding support inaccessible, and therefore switch to neutral language as the default. To question or refuse this switch is taken as evidence of transphobia, privilege, and a callous pouring of salt on those for whom association with the female is an open wound.

Recently, the Australian Breastfeeding Association shared the above meme on their facebook page, accompanied by text reading:

Australian Breastfeeding Association services are available to everyone who is entitled to them* and are free of any form of discrimination, irrespective of a person’s country of birth, culture, language, race, religion, sexual orientation, gender identity or marital status. We encourage all mothers to reach out to us as we support, educate and advocate for a breastfeeding inclusive society and to increase breastfeeding rates in Australia. All ABA volunteers are bound by a Code of Conduct. You can view our Code of Ethics here. https://www.breastfeeding.asn.au/policy/code-ethics

The backlash was immediate. Within hours, dozens of comments attacking the ABA for using the phrase “We encourage all mothers to reach out to us” were posted:

My personal favourite was this comment, because even the inanimate objects were doing it wrong:

Despite clearly stating upfront that ABA breastfeeding support is available to all, and a history of working to understand and meet the needs of same sex and gender non conforming families (including this meme, which is clearly referencing LGBTQ+ families), encouraging “mothers” to reach out for breastfeeding support was incendiary. By the next day the ABA, a volunteer-based organisation literally founded on principles of mother-to-mother support, had bowed to the pressure and updated the caption, replacing “mothers” with “mothers, parents and caregivers”, and adding an apology for “not being inclusive of all in our original post”.

Even the science of breastfeeding is being re-imagined as gender neutral. When Maureen Minchin, doyenne of Australian breastfeeding research, shared the following post, she came under fire for using the term “women’s milk” when describing the differences between breastfeeding at the breast vs bottlefeeding expressed milk vs formula feeding: 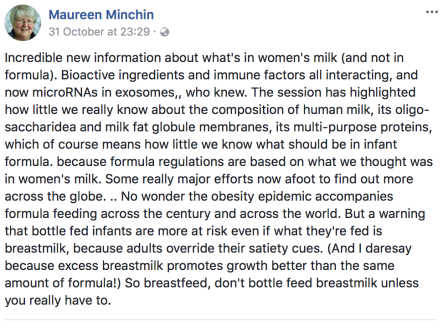 Within an hour of her post, discussion of the unique interaction between mother and baby during breastfeeding had been derailed by commenters telling Minchin off for using feminine-referencing language, and demanding the ‘simple fix’ of applying the term ‘human milk’ in its place.

Lest we see these as isolated incidents, keep in mind that in 2014 La Leche League International changed their policies so that being a mother was no longer a requirement for serving as a Leader; in 2015 the Midwives Association of North America amended their core competencies to refer to “birthing individuals” and “pregnant people” and in 2017 the British Medical Association supported a campaign opposed to the use of the term “pregnant woman” in the United Nations International Covenant on Civil and Political Rights. These interactions are occurring over and over again in spaces supposedly dedicated to protecting mothers, and I know I’m not alone when I say  – enough already.

Breastfeeding and birth are not some exclusive femme utopia dominated by white cis hetero privilege. The burden of the impact of not breastfeeding is not something which could happen to any parent, yet falls on mothers because they chose to identify as female. No, breastfeeding support and activism exists because the patriarchal systems and structures which rule female lives, have decimated and exploited our bodies and relationships to the extent that such support and activism became necessary. Shifting to gender neutral language as the default when describing birth or lactation is the very essence of misogyny – in one fell swoop denying the sex-based oppression of women while removing our ability to effectively name and thereby resist it.

Women who dare to name female oppression have always been silenced in one way or another. In a “white-male privileged, feminine-hating, patriarchal, child-neglecting culture that abuses all things tender”, drawing attention to the unique nature and needs of mothers and babies – let alone standing up and fighting for them – is deeply transgressive. What better way to literally neutralise efforts to safeguard the bodies and autonomy of women, than by framing lactation and pregnancy as a human experience rather than a specifically female one.

For if we cannot refer to the unique biological realities which underpin the reproductive life and work of women, how can we expect those realities to be respected or valued? How can we explain that lactation is not the same as breastfeeding? How can we protect mother-baby dyads from being separated? To paraphrase Glosswitch – our most immediate challenge is not whether all pregnant and lactating people are regarded as women, but whether all pregnant and lactating individuals are regarded as people.

And therein lies the rub. Because within patriarchy, for feminine descriptors to be considered offensive and distasteful is nothing new. In the 1960s, neither La Leche League USA or The Nursing Mothers Association of Australia were allowed to use the word breastfeeding in their public materials. In 2017, the misogyny and homophobia required to sustain binary gender norms is so visceral that ‘breastfeeding’ must make way for ‘chestfeeding’ in order to be truly inclusive of non-binary folk. The irony is epic.

Furthermore, by relying on the claim that naming womanhood is an act of exclusion or transphobia, inclusionism strikes at the soft underbelly of feminine socialisation. Women are taught from infancy to Be Nice. Don’t be offensive, don’t make people feel uncomfortable, don’t be a bitch. So when enculturated carers, engaged in some of the most frontline caring work that exists, are told that we are not actually helping but hurting, it stops us in our tracks. Our confidence wavers, we question ourselves. Everything we thought we knew about breastfeeding is suddenly wrong, and we defer to those who are ready and willing to instruct us on how it Should Be Done.

In discussions of gender identity and inclusion I have often heard that we need to focus on impact, not intent. So do I think that erasing women is necessarily the intent of those advocating for gender neutrality? Actually, I don’t. What I have seen in my interactions so far have been people who really want to make sure that marginalised people are not further marginalised and that breastfeeding support and information is truly accessible and rights are protected. But this must not happen at the expense of our ability to identify sex-based oppression of women through our reproductive bodies and lives. Inclusion that demands that women submit to gender ideology and use words that are imposed on us the expense of our ability to describe our bodies and ourselves is not inclusion.

Motherhood is a broad church. We are birth mothers, adoptive mothers, surrogate mothers, foster mothers, stepmothers, same sex non-birth mothers, othermothers – we do not always feel like mothers or even want to be mothers, but the barriers to birth and breastfeeding are imposed on us nonetheless. Trans parents face unique struggles within this, but the solution to making room for them cannot be to impose language and standards which further restrict and control women. Breastfeeding is not a gender neutral act, and I will not be neutralised.

13 thoughts on “Breastfeeding is not a neutral act”