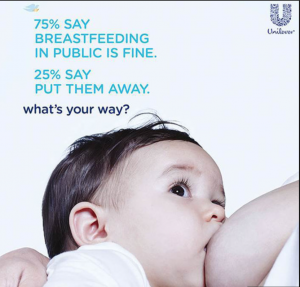 “36% are for feeding him when he cries, 64% are passionately against it. What’s your way?”

So goes the sparkly new marketing campaign from Baby Dove (owned by Unilever), which began circulating in social media feeds over the weekend and by now has hit mainstream media. According to Unilever, the campaign “simply aims to celebrate the different approaches and opinions around parenting”. Because apparently at Unilever, discrimination against breastfeeding mothers or refusing to feed a crying baby are just one parent’s ‘way’ against another.

Some would give Unilever the benefit of the doubt, imagining a Sisterhood-of-Motherhood-type attempt to cash in on smoothing out the Mummy Wars that just went horribly wrong. I find it hard to be so generous; we are after all dealing with a company which has a history of seeing all publicity as good publicity, particularly when that publicity is grossly misogynist.

For example, Unilever’s entire marketing strategy for Lynx (Axe) appears to consist of double entendres about balls/getting dirty/premature ejaculation combined with images of women who seem… how can I put this… somewhat unlikely to be actually attracted to the average shower-in-a-can user. And whatever you do, don’t think too hard about the number of brains which failed to be employed during the creation of the Axe Upskirting Mouse Pad.

Over at Lynx’s sister brand, Dove, Unilever attempt a ‘body positive’ approach with their Real Beauty campaigns, which have been praised for their diversity and including women of different sizes, ages and races. This is definitely because they want to contribute to society and has nothing to do with recognising that you can make more money by widening the spectrum of women who are allowed to try and qualify as Real Beauty. 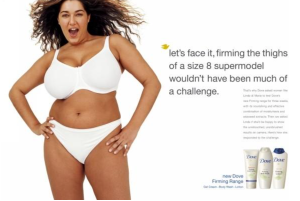 But regardless of whether Baby Dove’s marketing strategy was courting controversy or merely colossally stupid, the message they are pushing is the same: infant feeding is a matter of opinion. Mothers make different choices, time to unite and buy the soap that washes that nasty stench of judgment away! Never mind that breastfeeding in public is a legally protected right. Never mind that 60% of the population are  ‘passionately against’ feeding a crying baby. Baby Dove won’t take sides! They’re everybody’s friend! So kumba those ya-yas, ladies, ok? 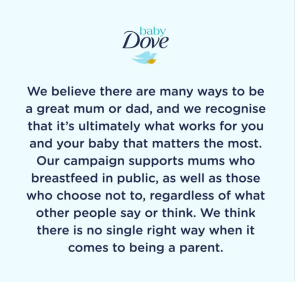 In response to the backlash, Baby Dove published this epic SorryNotSorry on their Facebook page. Baby Dove appear to be under the impression that their role in society is to affirm parents and tell us what Really Matters in our lives. Um… nope. Baby Dove’s role in society primarily consists of making bucketloads of money by selling as much petrochemical and palm-oil laden goop as they possibly can. They do this by exploiting the insecurities of their target market in order to convince us that buying their product will make our lives better. Which is why it’s so revealing that Baby Dove chose breastfeeding as the battleground on which to fight for the parenting dollar.

The predictable outcome of all of this has been a flurry of media coverage and talking heads discussing whether or not breastfeeding in public is ok. This is exactly the kind of diversionary tactic the marketers were hoping for – Dove gets free publicity while we all argue among ourselves about breastfeeding and guilt and mummy wars. This is the same approach commercial formula marketers have been taking for decades. And we have to stop taking the bait.

Breastfeeding is not a matter of opinion. It is a human right for both mothers and babies, and lives literally depend on it. But too many families find themselves hemmed in by lack of choice. We should not be asking ‘what’s your way’, we should be asking why Unilever is reinforcing barriers to breastfeeding by presenting it as subjective, just one of a range of neutral options that women need to stop having feelings about. Our way can be 100% to refuse to play the game, and instead to keep refocusing the lens on to how to make breastfeeding so accessible that it can no longer be used as fodder for faux controversy.